The Swedish-Afar humanitarian organization Afar Friends in Sweden announces that its office at Svartbäcksgatan 52D in Uppsala will be closed for a period of 10 days starting from today Tuesday April 26.

This is to mark the mourning period which is going on right now in the entire Afar Triangle due to the death of the Afar Sultan Amoyta Alimirah Hanfare.

Afar Friends in Sweden will also take this opportunity to send condolences to the Afar Nation in general and to the family and relatives of the deceased sultan.

May peace prevail on his soul!

Since the so called scramble for Africa in the beginning of 19th century, the Afar people has been experiencing the horrors of war that successive government aggressors and occupying forces have been waging against the land and the culture. As the direct result of the European colonisers division of African lands and seas, the Afar land, mostly known as the Afar triangle, was divided between three states, in which the indigenous Afar people since then live as second class citizens. Postcolonial states did not either meet their expectations of a better life.

Eritrean Afars, who were thirsty of liberation after more than one and half decade under the yoke of Dergs (the Ethiopian military junta that took power in a coup in 1974) repressive regime, were seized with panic when they discovered that the cadres and leaders of the so called liberation front  EPLF  were just as barbaric as the Mengistu regime, if not worse.

The only changes the Afar people experienced with the independence of Eritrea is the changing of the official language from Amharic to Tigrinya and the cultural transformation that the country is going through right now with the aim of Tigrinya-izing this tiny nation. Today the Afar territory in Eritrea is divided into two parts where the Afars are amalgamated with other ethnic groups to make them minorities. There are no native Afar cadres in service in the areas inhabited by the Afars. The Afars must use interpreters in their contacts with the highly bureaucratic administration in their own homeland.

The only income sources the Afars have in that part of the Afar triangle, which they have been using since time immemorial, are salt manufacturing and fishing  now forbidden for them to work with. Salt marks and fishing boats are confiscated. Nobody under the age of 50 years has any right to leave the country and the people are taken in custody with no end.

The mass arrests that began with the arrest of more than 200 Afar politicians and civil servants in 2000 are endlessly continuing. Many of the Afar prisoners of conscience have died due to injuries of torture that were inflicted upon them while they were in detention. This is a recurrence of the inhuman politics diligently used by the Abyssinian colonisers that different ethnic groups of Ethiopia experienced during the time of both Haile Sellassie and Mengistu Haile Mariam.

Because of the prevailing situation in the country, many young people flee to neighbouring countries or to Europe to seek sanctuary there. But when the security agents discover that young people flee, they arrest their parents and release them only when they have paid a sum of 50 000 Nakfa for each missing boy. Otherwise they are sentenced to many years imprisonment. The barbaric Eritrean government is not only leading the Eritrean Afars to extinction, it is also arming them against each other to weaken the rising Afar demand for self-determination.

The only viable way out of the vicious circle Eritrea is living in is not to try to hush up the citizens who are only demanding their God-given right, but to open up a dialog with opposition groups and civil societies. This, hopefully, can lead to the harmonic co-existence between different ethnic groups with equal rights. 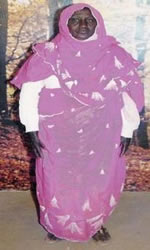 It is with deep sorrow and grief that we inform our members, supporters and the Afar mass in general, both at home and abroad, that the Afar community in
Scandinavia lost their source of inspiration Hajjia Kadiga Barkat who died at
the age of 80, on Sunday, 10 August 2008, in Stockholm, the capital city of
Sweden. Our loved mother Hajjia Kadiga was born in Laamassan and grew up
in Assab there she also got married to the late Al Haj Idriss Jaabir Kekya to
whom she gave birth to four children: Mariam, Eicha, Jaabir and Mohamed-
Nur.

Al ayto Kadiiga that she also was called, was best known among her
acquaintances for her generosity and sincerity. She was greatly respected and
admired by the entire Afar Diaspora in Sweden.

May Allah the Almighty Put Her Soul in Eternal Peace.