On 9 February, Jean-Paul Noёl Abdi, the president of the Djiboutian League of Human Rights (la Ligue djiboutienne des droits humains, LDDH), was arrested after he investigated and reported on arrests following recent student protests in the Republic of Djibouti, in the Horn of Africa.

The National Police arrested Jean-Paul Noёl Abdi on 9 February and he was taken to the police headquarters located in Djibouti City (Djibouti-Ville).

Later on the same afternoon, he was brought before the Prosecutor General (Procureur de le République) who charged him with participation in an insurrectional movement (“participation a un mouvement insurrectionel”) under articles 145 and 146.4 of the Penal Code. The charges carry a possible 15 year jail sentence and a fine of seven million Djiboutian francs (around 40,000 USD).

He was then transferred to Gabode Prison, Djibouti City.

On 5 and 6 February, Jean-Paul Noёl Abdi recorded and shared information about alleged arbitrary arrests following student protests in Djibouti City. He had also tried to visit the students in detention. Another Djiboutian human rights defender has also reported the arrest of at least seven opposition party members, from the Movement for Democratic Renewal and Development and the Union for Democracy and Justice.

Student protests took place on 5 February and were in response to a low pass rate this year and the quality of the education system. Local sources believe that the protests have become increasingly political. The international media has reported civil unrest and low-level violence, including rock throwing and looting.

Presidential elections are scheduled for April 2011. Opposition parties refused to take part in the 2005 and 2008 elections because their demands for changes in the electoral process were not met.

PLEASE WRITE IMMEDIATELY in French, English or your own language:

– expressing grave concern that human rights defender, Jean-Paul Noёl Abdi, has been detained on charges of participating in an insurrectional movement, apparently for investigating and reporting on arbitrary arrests following

– urging the authorities to release him immediately and unconditionally, as he is a prisoner of conscience, detained solely for exercising his right to freedom of expression;

– calling on the authorities to ensure that all Djiboutian human rights defenders can work freely and independently and with the full protection of the state.

Also send copies to diplomatic representatives accredited to your country. Please check with your section office if sending appeals after the above date. 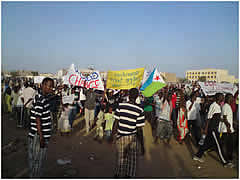 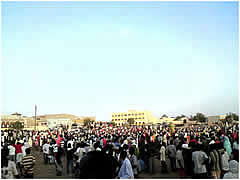