Djibouti can give the impression of a fairly modern town at first glance, but a walk in the backstreets outside the city centre reveals crippling poverty.

Families from Djibouti, Ethiopia and Somalia live side-by-side in tin-roofed shacks, half-constructed buildings and huts made of twigs and pieces of cloths. 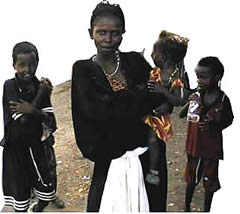 Its in one of those neighborhoods where a local womens association meet – inside a house with a large room with about 30 women and children huddling together. All of them had come from Mogadishu and had sought refuge in Djibouti in the past three months.

One woman had arrived just three days prior. The journey from Southern Somalia to Djibouti can take up to two months by car and by foot.

The road is dangerous, with militias manning hundreds of checkpoints all along the way.For the next two hours, they tell their stories: destroyed homes, murdered husbands, hunger, grueling walks, beatings at the hand of soldiers, looting of their meager possessions, sexual harassment.

They had come to Djibouti because they heard it was a safe place. Most had left family members behind and were without news of them. A girl of 13 was alone in taking care of her four younger siblings. A woman in her 40s had a wound in her leg: a stray bullet had hit her as she was outside her home in Mogadishu. She had also been raped on the road to Djibouti.

The womens association receives no external funding, and depends on the goodwill of people in the community to buy some food. However they dont receive nearly enough. >The families live in makeshift shelters on the dry river bed. Children eat only a bowl of rice per day.

It is these children that our medical staff from Camp Lemonnier provided care to in conjunction with Caritas International.In Arhiba, a shockingly dirty slum in Djibouti City, a mother and her three children live in a tiny shack made of cardboard, wood, and metal junk.

Their home has neither windows nor a door. Through gaping holes in the walls enter dust, blood sucking insects and Djibouti’s unrelenting desert heat.

All the mother owns is a collapsing metal bed, a kerosene lamp, two cups and a plastic bucket. She and her three children belong to the poorest of the poor, cramped together with 20,000 others in Arhiba, a short distance from Djibouti’s presidential palace.

She and her husband were Ethiopian pastoralist whose livestock died from drought, and who came to Djibouti believing the country was rich. There used to be jobs for the asking at tis deep-water port, which handles practically all landlocked Ethiopia’s exports and imports. But the port has been modernized for container shipments and many dockers have lost their jobs.

The irony is that Djibouti itself is suffering from a never-ending rural exodus and an ever-increasing jobless rate. According to government estimates, 60 percent of Djiboutians are without work – and often without food. Very few people starve to death, but many people don’t have enough to eat.

The jobless survive only thanks to the help of relatives and a strong tribal and family support system.Ironically, Djibouti City is one of the most expensive places in Africa. Everything is imported, from foodstuff to clothing and construction materials. A hard day’s labor at the port in the sweltering heat earns a laborer less than $6.00. A bed in a room shared with 10 other people in Arhiba costs 10 times that each month.

The money earned is hardly enough to fill the stomach. Kerosene is relatively expensive and the cheapest meat costs more than half a day’s salary. Most vegetables and fruit are imported. Only a loaf of French bread is cheap. Djibouti’s French colonisers built Arhiba 34 years ago for dock workers from the Afar ethnic group, providing them with free electricity and water.

Nowadays, an open sewer runs through the middle of Arhiba. Clean water and electricity is scarce. It’s inhabitants susceptable to cholera and malnutrition.

If work can be found, then families can be fed. Sometimes they have one meal a day and sometimes they don’t.When you talk with the young people, their hope is big. They live on hope. And hopefully life will improve in Djibouti. The people are intelligent and some of the friendliest that you’ll ever meet.